It’s been years since Elmer Lowenstein last went on holiday. He’s been saving up for the last few months and decided to browse the web, looking for travel destinations. “A trip to Granite Falls seems perfect,” he thinks.

At his retirement party, Elmer had a one-night stand with a younger woman. He hasn’t heard anything from her ever since, until recently when he received a letter stating that he’s the biological father of two twin boys. Their mother passed away, which means he is now their legal guardian as well.

At first, Elmer didn’t want anything to do with these boys, but he’s growing pretty close to them and at least he never had to change any diapers – it’s bad enough having to change his own. People often mistake him for their grandfather and burst out in laughter when he tells them that he’s actually their father. It annoys him, but he’s been in this world long enough to not let other’s opinions bother him. Kyle is the younger of the twins, by twelve minutes. He’s the confident, self-assured one who protects his brother from bullies at school. A typical boy, he’s glad that he finally has a father he can call his own, like all the other kids. Still, he struggles to fit in because of his brother. Jaden is the eldest of the twins; very squeamish and petrified of bugs and spiders. He also prefers to dress and behave like a girl, much to Elmer’s dismay. Elmer has taken Jaden to the pediatrician once, but was told to let Jaden dress like a girl and that it might just be a phase he’ll grow out of one day. It’s a rainy day and the kids are on their way to school. Neither of them want to go. Jaden is dressed in a pretty (and very feminine) black dress and classy flat shoes. Elmer’s been thinking a lot about his mother today and mourns at her tombstone in the pouring rain. It’s been decades since she’s passed, but he still misses her. It feels like just yesterday that he was a boy, the same age as his sons, with his mother sending him off to school. He knows exactly how Kyle and Jaden must be feeling with their mother gone and sometimes he wonders if that’s the reason Jaden is the way he is. Soaking wet, he eventually goes back inside and plays BlickBlock on his computer. “One’s never too old to play video games!” he thinks.

He then prepares some grilled cheese sandwiches for himself and sits down in the kitchen to eat. “I remember how Mother used to make these,” he thinks. “It just doesn’t taste the same.” After eating, he puts his plate in the dishwasher and hears the boys coming home from school.

He grabs a glass of orange juice and joins them in the dining room, where they’re doing their homework.

“How was school?” he asks and sits down.

“Okay, I guess,” Kyle answers. “Some kids picked on Jaden again, asking him if that’s the dress he wore at Mother’s funeral. You know, the usual.”

“Perhaps I should go talk to those kids,” Elmer says and puts his glass down a little harder than he intended. “Or better yet, their poor excuses for parents!”

Being elderly, Elmer became tired more frequently. The ottoman in the dining room is surprisingly comfortable and he often takes naps on it.

The kids often have to prepare their own dinner, since Elmer would likely be asleep. Jaden reheated some leftover chicken nuggets in the microwave. Kyle decided to take a nap as well. It was an exhausting day at school. Jaden doesn’t mind standing while eating his meal. In his mind, it made up for all the time  spent sitting down behind a desk in class.

He washes his plate afterwards, since the dishwasher’s full. He also grabs one of the cookies he baked during the weekend. He liked baking with his mother before she passed.

While the ottoman is comfy, it often leaves Elmer with a very stiff neck. “Guess it’s time to get into an actual bed,” he thinks and smiles.

Kyle changes into his pajamas and gets into his bed. He likes the outdoors and all the things boys like – sports, cars, girls and dinosaurs. He wishes his brother shared at least some of his interests. Then he’d have an actual friend; someone he could relate to. Now, all he has is an elderly father he barely knows and a brother who dresses and behaves like a real girl. No one at school wants to be his friend, because of his “weird” brother. 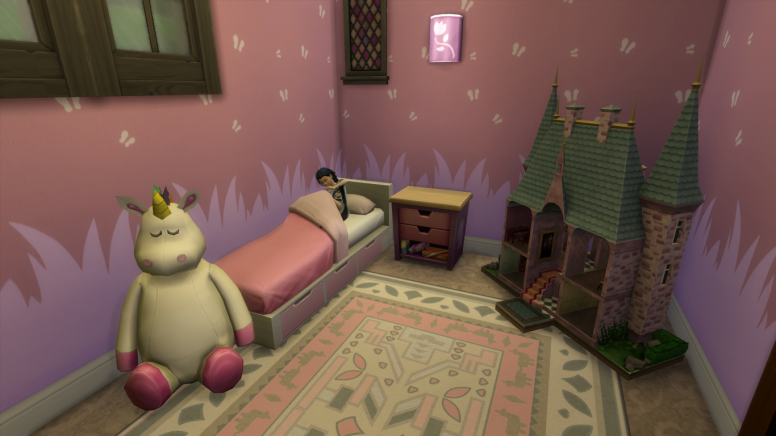 Jaden also went to bed. When the boys moved in, Jaden insisted on his own room and that it should be decorated in pink colours, complete with a big unicorn bear, a walk-in closet and a dollhouse every little girl could only dream of. In Jaden’s mind, he’s a girl. A girl trapped inside the body of a boy. Elmer finally goes to bed after booking that trip to Granite Falls. He’s looking forward to it – it might be their last vacation after all.

Author’s Notes: Thank you for reading. This chapter featured VanPelt81‘s submitted family, the Lowensteins. Nothing much happened in-game and I had lots of bugs playing them, including Jaden nearly drowning in the pool during a thunderstorm (he wouldn’t get out)! Luckily they had a very interesting backstory (as all VanPelt81’s Sims usually do), so I had enough to write about. The original lot included a Sim’s gravestone and I completely forgot about it (until Elmer mourned at it), so I pretended that his mother was buried there and that he mourned for her.